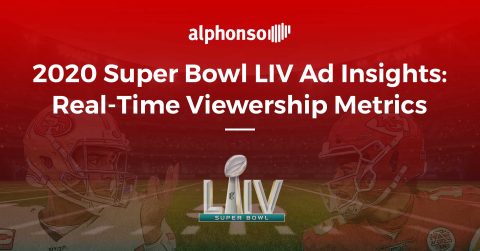 Whether it was Post Malone uncontrollably thrashing a convenience store, an old man tugging at your heartstrings with memories of his deceased wife, or Bill Murray finally finding something different on Groundhog Day, this year’s Super Bowl TV ad creatives did not disappoint, for the most part. You can watch them all, along with their viewership rankings and other data, in our Super Bowl Ad Center.

Viewership peaked during the first quarter as the 49ers made their first big drive, so ads that aired earlier in the game enjoyed the day’s largest share of audience, as measured by the Alphonso Viewership Index. Ironically, this is when two of the least popular ads (according to USA Today’s Ad Meter), from Quibi and Donald J. Trump, hit the screen. Both had nearly the highest viewership score possible, but failed to resonate with viewers.

An ad from Tide that also plugged Bud Light and Pepsi, and a promo for Fox’s The Masked Singer were the most seen, airing just as viewership hit a height it would not return to for the remainder of the game. Other ads scoring a .99 on the viewership scale (1.0 being the high-water mark) include promos for The Daytona 500, and Universal Picture’s F9: The Fast Saga.

And even with all the sizzle the halftime show brought, overall viewership dipped to just under 80% of it’s peak at the end of the 2nd quarter, and would remain there until the final play.

Fox easily captured the vast majority of the overall TV audience throughout the game, taking control during its pregame broadcast. And even though more than half the audience turned off their TV after the game, the host broadcast net held onto 25% of the total Super Bowl audience for its postgame shows on Fox and Fox Deportes; also providing good lift for its season premiere of The Masked Singer that followed.

Get all this data and more at the Alphonso Super Bowl Ad Center. Want granular TV ad insights for your brand? Contact us at info@alphonso.tv to learn why the best brands trust Alphonso for real-time TV and OTT measurement, and multi-touch attribution.