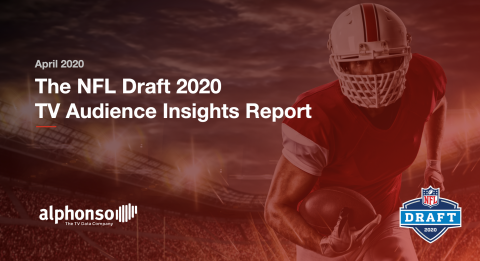 An Oasis In a Sports Desert: The 2020 NFL Draft

It’s been a dry season for sports programming, to put it mildly, and sports fans were yearning for new content. According to our viewership analysis of the 2020 NFL draft, based on TV data from 15 million smart-TV households, those thirsty fans drove first-round viewership of the at-home 2020 NFL draft up 40% over 2019.

The following rounds throughout the weekend were also up significantly, by 45% in Rounds 2 & 3 and 35% in Round 4.

Draft viewership peaked during the first 45 minutes of the broadcast, but the biggest fans (the top 25% of the audience) stayed engaged for at least 2 hours and 45 minutes.

The analysis also revealed half the audience watched draft picks for nearly two hours and the average overall viewing time across all people who tuned in was just over an hour (Figure 2).

For viewership by metro areas, NYC, L.A., Philadelphia, Dallas and Chicago ranked highest among NFL cities, which helped lift the audience to the largest it has been since 2014 (Figure 3).