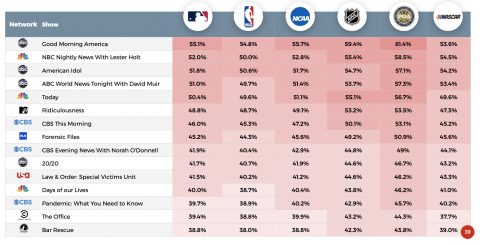 Broadcast TV – which includes news, national shows and syndicated shows – had fairly high viewership throughout the month of February, with Super Bowl Sunday on Feb. 2 highlighting its peak, according to 15 million smart-TV HHs.

The next increase in viewership came in the first weeks of March but declined in mid-March as sporting event cancellations started.

However, people continued to tune into broadcast TV the rest of March through mid-April, with sports audiences watching other programming. As such, advertisers could still find their audiences during this time by utilizing viewership trends.

For example, viewers that watched PGA Tour programming were found to be watching Good Morning America on ABC (61%) and NBC Nightly News with Lester Holt (58%) during this time.

To get more insights like these, join our weekly webinar series which take place every Wednesday at 1PM ET / 10AM PT. You can sign up here.