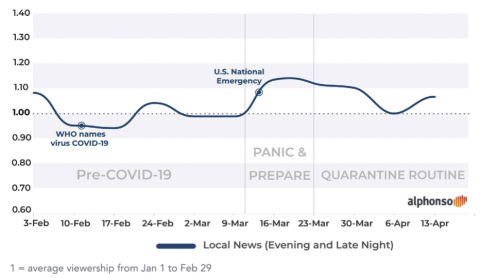 An analysis from 15 million smart-TV HHs shows that, following a spike in mid-March, local news continued to maintain viewership throughout mid-April, indicating that many people were seeking information on what was going on in their communities.

When looking at OTT trends, there was a major surge in March following the declaration of a national emergency in the U.S., with viewership increasing 30%.

Since the initial jump in viewership, OTT stabilized throughout the rest of March and into mid-April, showcasing a constant consumption by viewers.

Cable news networks such as Fox, CNN and MSNBC also experienced a major surge starting in March, with viewership up and remaining 50% higher than before the Covid-19 crisis began.