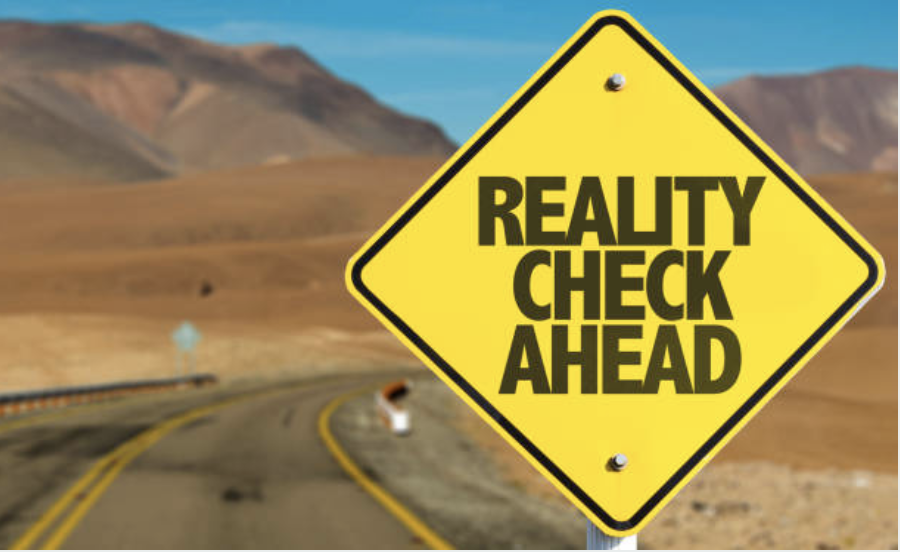 Fact Over Fiction: A Rebuttal to Samba TV

Alphonso is aware that Samba TV, having suffered a significant defeat in court, is now trying to make lemonade out of lemons. In doing so, Samba TV is providing false or misleading information, both privately and publicly.

Combined, Samba TV’s challenges have landed them in a position to have to fight their battles outside of the normal course of business, resulting in tactics such as these misleading communications. Following is our rebuttal to Samba TV’s recent statements about Alphonso, and the supporting facts.

Regarding Alphonso’s Win Over Samba in its Patent Infringement Lawsuit
In December 2018 Alphonso won a summary judgment of non-infringement in Samba TV’s law suit against us. No matter how Samba TV tries to to spin this, the fact remains, Alphonso won. This is our second legal win over Samba TV in this matter.

Regarding comments Samba TV made about Alphonso’s technology distribution and OEM partnerships
Samba TV’s suit against Alphonso was filed in November 2015, over three years ago. Discovery for the case closed in September of 2017, about 18 months ago. Samba TV conveniently misrepresents or ignores facts, such as the fact that Alphonso also had access to Vizio data when Samba TV had filed its first lawsuit.

In fact, in recent blog post and emails to customers, Samba TV stated that Alphonso gets data from Gracenote, without disclosing that it is in fact data from LG TV. Is it because they have the LG logo on their website and want to continue to tell customers they have LG data in U.S when in fact they don’t? By all appearances, this is yet another deliberate attempt to mislead. You should ask Samba TV if they have LG data in the U.S.

Regarding misleading claims about Samba TV’s own scale in the US
Samba TV does not get data today from any of the top US brands such as Samsung, Vizio, LG, and Sharp. Samba TV’s website, pictured below (from February 2019), shows 14 brands they claim to work with to collect data: 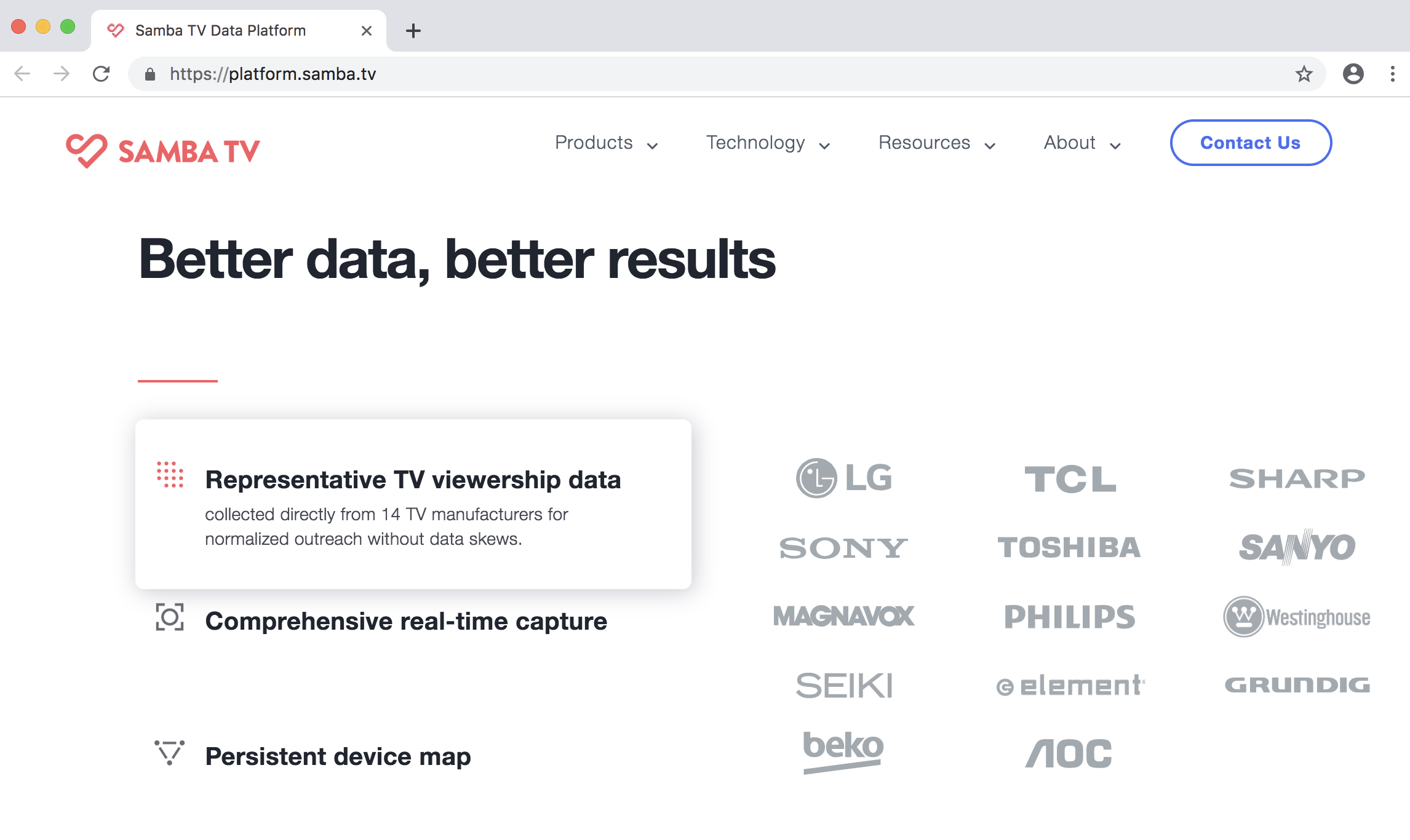 But of the 14 brands listed in the Samba TV website, there is evidence that Samba TV does not actually work with at least eight of them in the U.S. today: 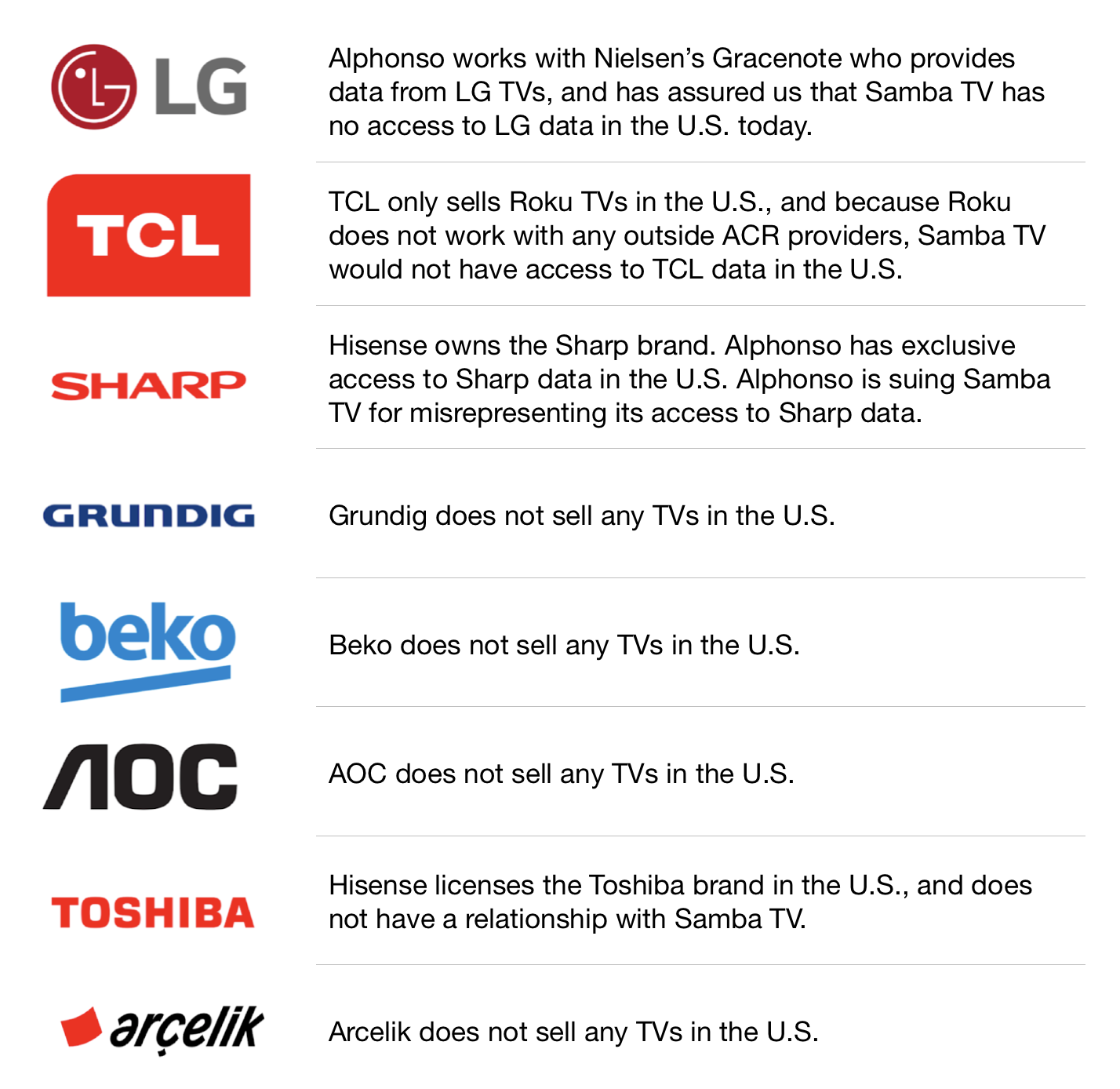 For Sanyo, Westinghouse, Seiki and Element: Alphonso has tested multiple commercially available models, across different geographic locations, sold by each of these brands. We have not found an opt-in for Samba TV services on any of these smart TVs. As such, we can only surmise that either Samba TV does not have ACR running on these TVs today, or they are collecting data without consumer opt-in.

If we count all these Smart TV brands, then the total number of brands that do not work with Samba TV in U.S. would be 12, out of the 14 claimed by Samba TV.

You should ask your Samba TV representative the following questions:

Without partnership from any major TV brands in US such as Samsung, Vizio, LG, Sharp, Hisense, Toshiba and TCL, combined with lack of scale for the partners they do work with, it should raise serious questions as to what scale Samba TV has in the U.S., the basis for the logos on their website, and their claims of 19.4 MM households worldwide.

Regarding Technology Automation
Samba TV made comments about our combination of automated technology and human interaction. Alphonso’s video AI, when aided by human judgement, is the best way to deliver optimal results for our customers. Alphonso campaign managers create custom segments for each campaign based on client needs, and we enable synchronization with various DSP platforms.

We do not sell commodity modeled segments. We use a collaborative approach with the brand/agency team to create custom audiences for every campaign, and then activate them on DSP platforms.

With human-driven campaign management Alphonso delivers real-time sync of ads: for example, if your campaign is targeting a particular program or designed to retarget a viewer of a specific TV ad, our ads are delivered in minutes to the consumer. During the recent Super Bowl, Alphonso campaigns delivered digital ads within seconds of an audience member being verified.

Alphonso uses a human aided method to provide real-time ads to our customers and delivers better results compared to competition. Campaign managers continuously monitor and optimize for viewability, performance, frequency, reach and more, ensuring fraud-free campaigns. Not all of these benefits are available without human aid.

The entire process is explained in the graphic below: 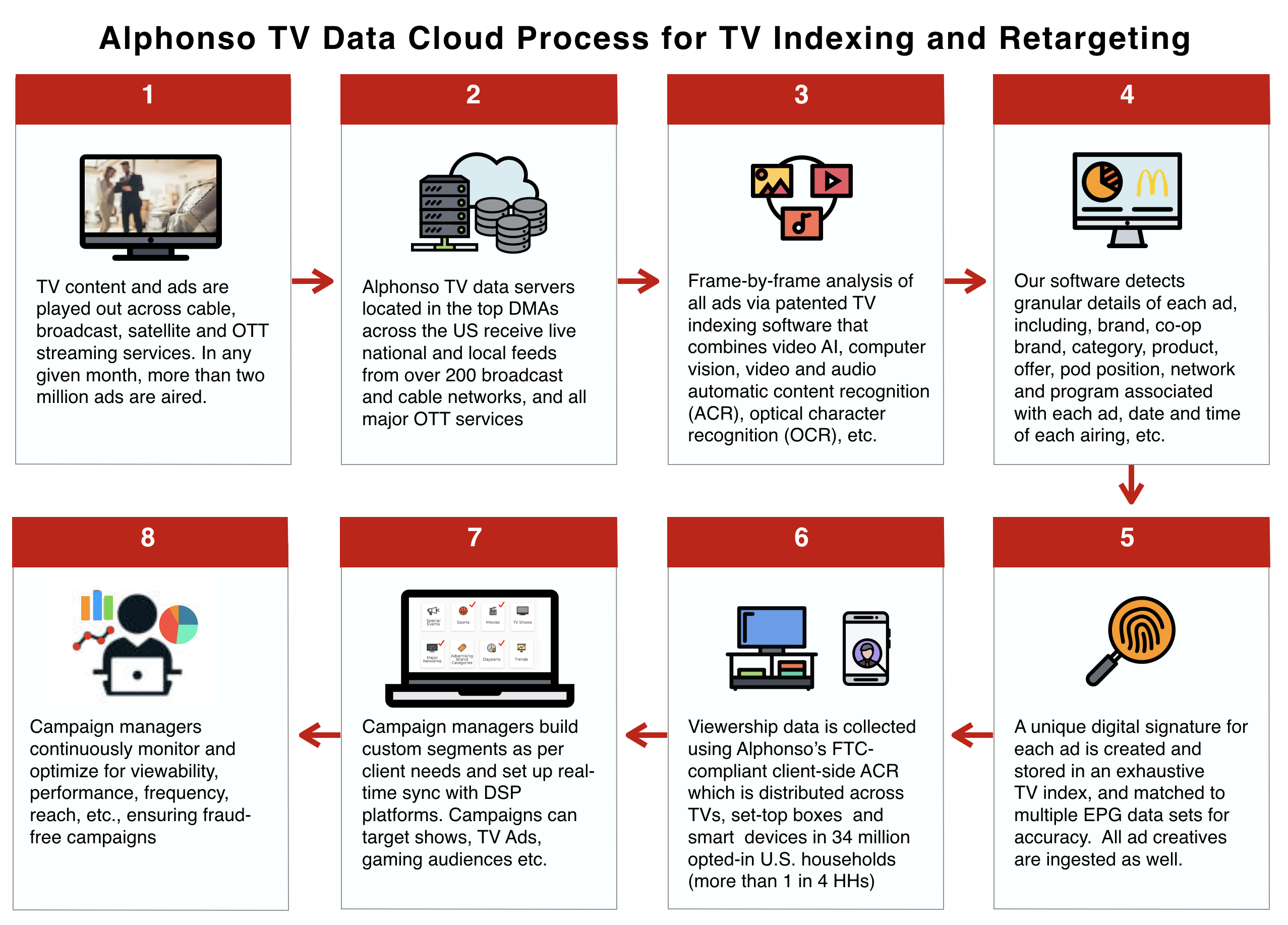 Alphonso continues to build a strong patent portfolio with 55 patents (30 granted and 25 in progress).

We would like to conclude by thanking you for your ongoing support. We are committed to bringing the most innovative solutions to agencies and brands.