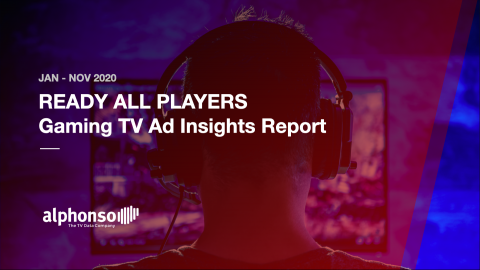 The pandemic has driven gaming to new heights across mobile platforms, the web, and consoles. 2020 saw some major new console introductions from big players – including the Xbox Series S/X and the PS5 – and younger entrants investing more heavily in TV advertising to promote gaming apps, even outspending much larger competitors.

In our latest report, we analyzed TV ad spend for the gaming industry from January-November 2020, using TV audience and brand data collecting using Alphonso Video AI across millions of smart TVs in the U.S.

Sony spent $23 million and Nintendo spent $18.2 million during this period. And though Xbox released its Series S/X in November, it only spent $1.7 million on TV ads this year through November.

Here’s a look at the TV ad spend by week around these top console and game releases:

For spend by daypart, our analysis revealed that that Prime Time saw the highest share of spend among console makers Nintendo (Switch), Sony (PlayStation) and Microsoft (Xbox):

Looking at top networks for advertisements aired, ESPN was the chosen network for gaming brands this year, with nearly 2.5 times more spend at $15.5 million. Nickelodeon followed at $6.4 million and TBS at $5.6 million.

Basketball, football and baseball games were prominently favored by these brands with $4.2 million spent on SportsCenter, 2.4 million on College Football and $2.3 million on NBA Basketball.

Interestingly, SpongeBob SquarePants was a notable exception to break into the top five shows by spend with $3.2 million.

Download our full report today for a complete look at the insights, including the top creatives by spend.