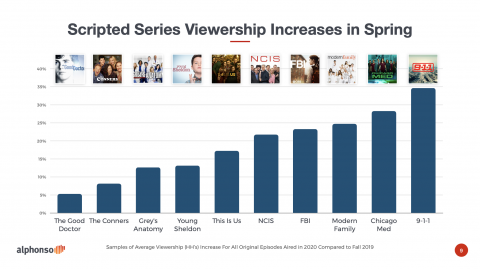 According to viewing behavior from 15 million HHs, scripted series has seen an increase in Spring viewership compared to Fall 2019 original episodes aired.

Though this viewership increase can likely be attributed to the lack of live sports programming (March Madness, NBA Finals, etc.), this shows that advertisers still have the opportunity to reach their viewers.

For late night shows in March, which now have hosts airing their shows from home, Fallon and Colbert have seen an increase in viewership compared to their February in-studio show average. Kimmel’s viewership remained the same.